E. coli stands for Escherichia coli, a large and diverse group of bacteria that live in the lower intestines of humans and warm-blooded animals1. Most strains of E.coli are not harmful, and are actually important components of a healthy human gut. Other types of E.coli are pathogenic, meaning they can cause illness. The types of E. coli that can cause illness may be transmitted through contaminated water, food, or through contact with animals or people.

WHERE DOES E. COLI COME FROM?

To better understand E. coli and water contamination, it is helpful to understand coliform bacteria in general.Coliform bacteria are organisms that are present in the environment and in the feces of all warm-blooded animals and humans. Coliform bacteria by itself does not typically cause illness. However, their presence in water indicates that disease-causing organisms (pathogens) could potentially be in the water system2, as most pathogens that can contaminate water supplies come from the feces of humans or animals.

Testing water for all possible pathogens is complex, time-consuming and expensive. In contrast, it is easy and inexpensive to test for coliform bacteria. Coliforms, rather than the actual pathogens, are therefore used to assess water quality because they are relatively easy to identify, are usually present in larger numbers than more dangerous pathogens, pose less risk to laboratory technicians, and respond to the environment, water and wastewater treatment similarly to many pathogens. As a result, testing for coliform bacteria (sometimes referred to as indicator organisms) can be a reasonable indication of whether other pathogenic bacteria may be present.

There are three groups of coliform bacteria. Each is an indicator of drinking water quality and each has a different level of risk: 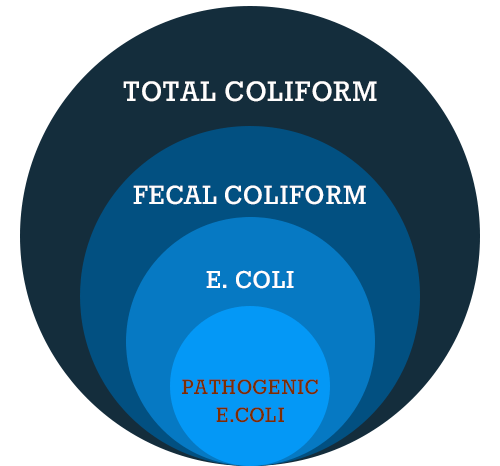 Total coliform bacteria are a large and varied collection of relatively harmless microorganisms that are common in the environment (soil and vegetation). The total coliform group is relatively easy to culture in the lab and thus selected as the primary indicator bacteria for the potential of other disease-causing organisms. If a lab detects total coliform bacteria in drinking water, this tells experts there may possibly be a way for pathogens to enter the system. In other words, while coliform bacteria are not harmful, their presence in raw unfiltered water indicates that larger disease causing organisms may be present. Thus, it is important to find and resolve the source of the contamination.

E. coli is a major subgroup of the fecal coliform group. Most E. coli are harmless and are actually part of a healthy human intestinal tract. However, other strains can cause illness. The presence of E. coli in a water sample indicates that the water has been contaminated by sewage or animal waste that may contain other disease causing bacteria.3

According to the CDC, “Some kinds of E. coli cause disease by making a toxin called Shiga toxin. The bacteria that make these toxins are called “Shiga toxin-producing” E. coli, or STEC for short … The most commonly identified STEC in North America is E. coli O157:H7 (often shortened to E. coli O157 or even just “O157”)."

When you hear news reports about outbreaks of “E. coli” infections, they are usually talking about E. coli O157. The CDC estimates that STEC causes 265,000 cases of illnesses, 3,600 hospitalizations and 30 deaths in the United states each year.5

What are the potential health risks associated with E. coli O157 contamination?

Symptoms of E. coli O157 and other STEC contamination include:

The Mayo Clinic explains, “Signs and symptoms of E. coli O157:H7 infection typically begin three or four days after exposure to the bacteria, though you may become ill as soon as one day after to more than a week later.”7 They also point out, “Young children and older adults are at higher risk of experiencing illness caused by E. coli and more-serious complications from the infection.”8

The vast majority of people fully recover from a bout of E. coli within a week to 10 days.9Approximately 5-10% of people diagnosed with E. coli O157:H7 develop a potentially life threatening type of kidney failure called HUS (Hemolytic uremic syndrome), where “...an individual's red blood cells (oxygen-carrying cells in the bloodstream) are destroyed and the kidneys stop working.”10

How are people typically exposed to E. coli O157 and STEC bacteria?

According to the CDC, infections begin when you swallow STEC (Shiga toxin-producing E. coli).11Invisible amounts of the bacteria are transmitted to humans primarily through:

How does E.coli O157 get into my water supply?

DAccording to the EPA, the presence of E.coli or fecal coliform bacteria in water is a strong indication of recent sewage or animal waste contamination.13 Waste can enter the water through different ways, including sewage overflows, sewage systems that are not working properly, polluted stormwater runoff and agricultural runoff. During precipitation, E. coli may be washed into ground and surface water, including creeks, lakes, rivers and streams. When these are used as sources of drinking water and the water is not treated or inadequately treated, E. coli may potentially end up in your drinking water and be inadvertently ingested.

When coliform bacteria are found through routine sampling, water systems investigate to find out how the contamination got into the water. Then they collect additional, or "repeat," water samples for testing, and often inspect the entire system. Taking repeat samples helps determine whether an actual problem exists. If any of the repeat samples detect coliform bacteria, the initial findings are considered confirmed.

For more information on sampling, read the EPA’s Voluntary Estuary Monitoring Manual, chapter 17 or How to Collect a Sample, Test for Coliform.

How can I protect myself and my family from potential exposure to harmful E. coli bacteria?

There is currently no vaccine for E. coli infections, nor are any medications recommended for prevention. Food and water that are infected with E. coli bacteria look and smell normal. The Centers for Disease Control and Prevention (CDC) suggests the following actions that you may take to reduce the risks of an E. coli infection:

In addition to following the steps outlined by the CDC regarding hand washing, food prep, cooking and swimming, put a final barrier system in place to purify your family’s drinking water on a daily basis. Do not wait for a boil alert or order. Your tap may already be affected by the time you find out about potential contamination in your area. In addition, boiling water is time and labor intensive, and only supplies small amounts of water at a time, making it an impractical long-term water solution.

When selecting a system, inspect test results as it relates to coliform bacteria. You will find information on Black Berkey® Purification Elements below.

PLAN AHEAD WHEN IN THE GREAT OUTDOORS

Plan ahead to reduce the risk of exposure to E. coli (and other) bacteria when camping, boating, RVing or hiking the great outdoors. It is essential to purify drinking water drawn from both raw water sources, such as lakes, rivers or streams, and water hookups.

Here is a complete approach for the outdoors:

What happens if E. coli is confirmed in my tap water?

Confirmation of E. coli in a water system indicates recent fecal contamination, which may pose an immediate health risk to anyone who consumes the water. Under the EPA’s Revised Total Coliform Rule, if a water system detects E. coli bacteria in its distribution system, mandatory corrective action steps are taken: 14

WITH A BERKEY® SYSTEM, SIMPLY EXPAND YOUR ROUTINE

If you are using a Berkey ® system with Black Berkey® Purification Elements you should consider expanding the use of purified Berkey® water to include more than your typical daily drinking, cooking and food prep. Use it to brush teeth and water pets (if you do not already do so). Toss any ice cubes that are not made with Berkey® water. Make fresh ones using ice trays. You do not need to boil your water in addition to running it through the Black Berkey®Purification Elements**.

However, as an additional precaution, if using a source of water that you believe might contain extreme viral and bacteriological contamination such as E. coli, it is recommended by the CDC, EPA and other organizations that approximately sixteen drops of plain bleach (sodium hypochlorite) or iodine per gallon be added to treat the source water before purifying. This should kill minute pathogens such as viruses, within 30 minutes.15 Simply add the drops to a pitcher of water, wait a half hour and then pour the treated water into the top chamber of your system. The disinfectant will be removed from the treated water entirely with the Berkey®system, including any odor or taste.

* Please use only room-temperature water with your system. Using boiling water can cause damage to the purification elements inside the Berkey® system.

The Black Berkey® Purification Elements have been rigorously tested, and reduce coliform bacteria (including E. coli 0157) to to greater than 99.9%.

View test results at our knowledge base.